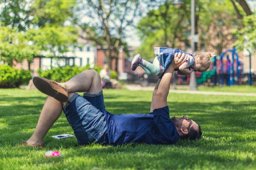 Walk down any street in Stockholm, Sweden and you will see many parents pushing their preschoolers in strollers. As an American you may be surprised that dads are pushing most of those strollers. The Swedish economy can’t afford to leave out half the work force and gender equality is the law so parents take turns on maternity and paternity leave with their children.

America is not Sweden, but change is here. As a preschool and arts teacher, I have had the pleasure of working in many schools. The school where I have spent the majority of my career as a preschool teacher is a parent cooperative. Having spent my mornings in this preschool for the last twenty years, I have been witness to a big cultural change – Dads as primary care givers.

The nature of a parent cooperative is family involvement so there have always been involved dads at the preschool. When I started as a teacher at the cooperative we would occasionally have a dad coop (serve as an assistant teacher in the classroom) during the week. It was not unusual, but it was always noticed. Children would flock to the dad. At story time at least three children would try to sit on any dad’s lap. Teachers would intervene and say, “Sit on your own bottoms.”

Twenty years later and it’s a very different story. At our cooperative we have two parents as assistants every day. Now we often have two dads and every week we have a pretty equal split of dads and moms who coop. It’s no longer something unusual and the children don’t think twice about it. Dads sharing in parenting and cooping at our school are now the norm. We still have some dads who can’t take the occasional morning off work to coop, but that is also true of some of our moms.

What is really new in my experience is the number of home dads. These are dads who are the primary caregiver for the children in the family. I am aware from talking with parents that this is not the norm everywhere, but with changes in the workforce, including computers giving many parents the flexibility to work from home, there has been a big shift in parenting for many Americans.

If you are a Home Dad in the Charlottesville area be sure to click on the following link. You don't want to miss their big event of the year - Father's Eve, Saturday, June 15!
https://www.meetup.com/Dads-With-Diaper-Bags-Charlottesville-VA

Here is the national organization with information about DadCon. An annual Dad meet up this year to be held in Minneapolis in September.
http://homedadcon.org